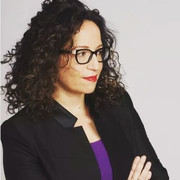 Amy Webb advises CEOs of the world’s most-admired companies, three-star admirals and generals, and the senior leadership of central banks and intergovernmental organizations. Founder of the Future Today Institute, a leading foresight and strategy firm that helps leaders and their organizations prepare for complex futures, Amy pioneered a data-driven, technology-led foresight methodology that is now used within hundreds of organizations. She is a professor of strategic foresight at the NYU Stern School of Business, where she developed and teaches the MBA course on strategic foresight. She is a Visiting Fellow at Oxford University’s Säid School of Business, a Nonresident Senior Fellow in the Atlantic Council’s GeoTech Center, a Fellow in the United States-Japan Leadership Program and a Foresight Fellow in the U.S. Government Accountability Office Center for Strategic Foresight. She was elected a life member to the Council on Foreign Relations and is a member of the Bretton Woods Committee. She is a member of the World Economic Forum where she serves on the Global Future Council on Media, Entertainment and Culture and the Stewardship Board of the Forum's Platform for Shaping the Future of Media, Entertainment and Culture. She was a Visiting Nieman Fellow at Harvard University, where her research received a national Sigma Delta Chi a ward. She was also a Delegate on the former U.S.-Russia Bilateral Presidential Commission, where she worked on the future of technology, media and international diplomacy. She is the author of several popular books, including The Big Nine: How the Tech Titans and Their Thinking Machines Could Warp Humanity, which was longlisted for the Financial Times & McKinsey Business Book of the Year award, shortlisted for the Thinkers50 Digital Thinking Award, and won the 2020 Gold Axiom Medal for the best book about business and technology, and The Signals Are Talking: Why Today’s Fringe Is Tomorrow’s Mainstream, which won the Thinkers50 Radar Award, was selected as one of Fast Company’s Best Books of 2016, Amazon’s best books 2016, and was the recipient of the 2017 Gold Axiom Medal for the best book about business and technology. Webb was named by Forbes as one of the five women changing the world, listed as the BBC’s 100 Women of 2020, ranked on the Thinkers50 list of the 50 most influential management thinkers globally. Her latest book, The Genesis Machine, explores the futures of synthetic biology